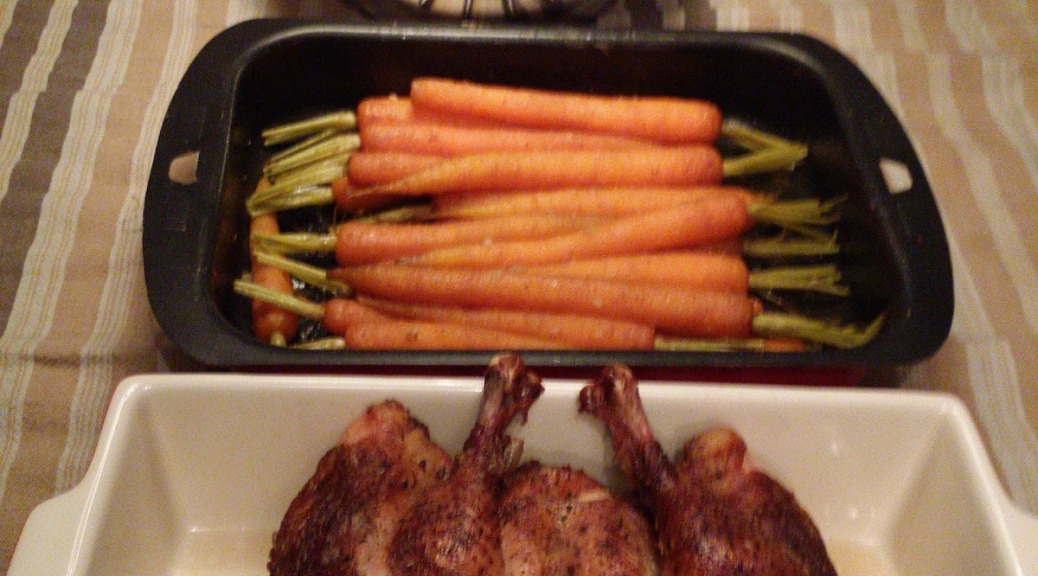 Saturday it was the 14th of February, and as you all know, that’s a beautiful day for people in love. Although we never ever join in into this extremely commercial festivity, it is a day to contemplate the love we have for eachother. Since I like BBQ and my wife has to cook every day, my love is expressed using the tools at hand, knowing a kitchen, some knifes, ingredients and a grill outside.

I’ve decided to do everything from the Q this day, so a clean kitchen and an honest and simple meal to be served.

I found a nice and simple recipe for the chicken with a very basic dry brine.

TS can be interpreted (by me) as TableSpoon, or TeaSpoon, and had I read a little further in the recipe, I probably would have got the point, but I didn’t …..

The correct recipe is TeaSpoons! Don’t get this wrong.

It’s a very tasty recipe that I will definitely do again, but with the correct measurements.

Take a chicken, and cut out the spine. Fold in the wing tips to the back and press it down with the skin side up until it cracks and flattens.

Sprinkle the salt/pepper mixture on it and focus a bit more on the thighs and the breast parts.

mind you, this picture shows way too much salt / pepper 😉

Put it in the fridge for anything between 4 and 24 hours and let it get some taste in. I did about 20 hours.

The next day, I fired up the chimney and got my Q on high. I placed coals on both sides and placed an aluminum tray in the middle, for the excess fat that will drip out. The chicken (with as much excess pepper / salt mixture removed as I could) was placed over that tray.

I’ve added a handful of apple wood to the coals and let it go for a nice ride in the OTP.

About 50 minutes later it was done and it looked and smelled fantastic.

I’ve placed this bird in the oven, to keep it warm at around 70 degrees Celcius, as this is a nice core temperature for chicks.

So I also did some potatoes, and I did them very simple.

Washed them and put them in aluminium foil. I just placed them on the coals and after 30 minutes or so, I started to see if they were done, by using a fork and pinching it to feel the softness of the inside.

Combined with some veggies. ( I know that’s what food eats before you grill it, but it’s valentine’s day, and my wife loves veggies …. 😉 )

I gave them a haircut and washed them up nicely.

After this, I placed them in an oventray, suitable for the Q and mixed them with about 2 tablespoons of olive oil,  about 2 teaspoons of coriander and 1 teaspoon of ginger powder. Also did a clove of garlic in it and some sea salt. added about 4 tablespoons of water to the tray and covered it with alufoil as well.

I placed this in the Q for about 45 minutes on 180 Celcius, and voila, it was finished.

Here some shots of the final product and we really enjoyed a very nice meal, covering all parts of the food groups….. including vegetables.