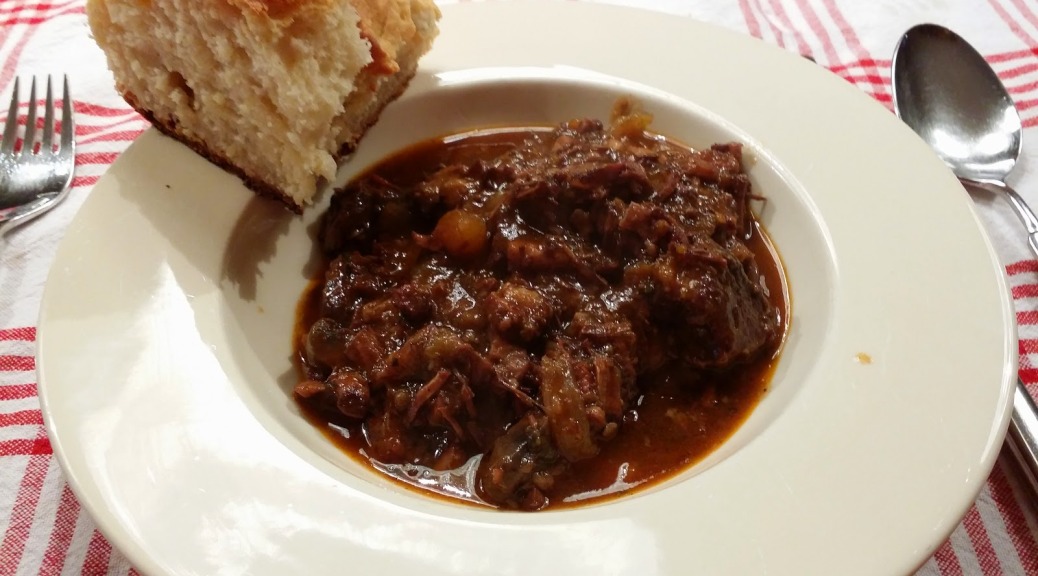 This weekend it was a gooood weekend! The weather was fantastic, forecast was good and I hade the fridge filled with beautiful ingredients. Also, it was something I wanted to try for quite some time now. Boeuf bourguignon, Dutch Oven Style.

I started out on saturday to cut the beef in squares of about 1 inch. I had about 2,5 kg of meat, so a big bowl full of meat was the end result.

I prepped the veggies, carrots, unions and mushrooms, in big chunks, and got the bacon. When I had all my ingredients ready, I fired up the starter with coals, and prepared a nice working area outside. I loved it!

When I had my coals ready, I placed about 9 or 10 of them below the pan and let it get really hot. When it was nice and hot, I put the bacon in and stirred that to perfection, after which I removed it from the pan again, but left the fat in the pan. I dried the pieces of beef and salted and peppered them accordingly. Once dried up, I put them in to the pan, one layer at the time, to brown them and close them up all the way round. Took some time, with 2,5 kg, but I managed to get it done.
After this was finished, I had a very big bowl of meat (beef and bacon), and started to put the carrots and unions in the pan, for about 15-20 minutes, to soften it up. After about 10-12 minutes I’ve added a lot of garlic and the mushrooms to the pan. 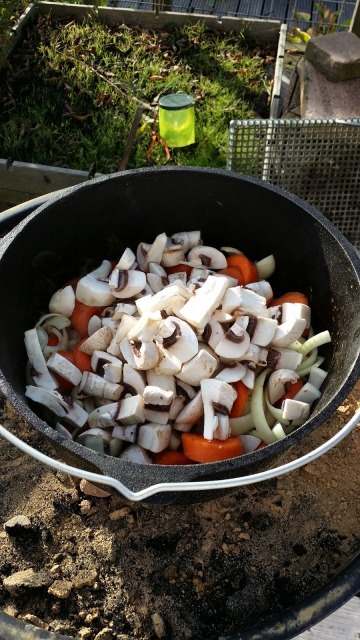 When all the vegetables were getting nice and soft, I’ve added about 1 tablespoon of salt and 2 tablespoons of grounded pepper. Stirred it nice through and put in some Booz. I used Marsalla, since I didn’t have cognac, but preferable that would be the choice, of course. Cognac can also be flambéd, but the Marsalla didn’t. Nevertheless, it gives a nice bite to the food.

I’ve put in the meat again and gave it a careful stir to mix it up nicely. Once done, I’ve added 2 cans of tomato puree and 2 cans of sour little unions (without the moist, of course). Some secret mix of Boeuf Bourguignon herbs, bought on a little market in Bretagne finished it off. Adding the wine now (2  bottles, to cover the meat up nicely) and we were good to go.
I’ve put about 10 coals below the DO and 16-18 on top. Just let it simmer softly for the time it needs.
I had anticipated on about 2,5-3 hours, but the harsh truth is that it took me twice that, roughly. No problem, it was a beautiful night with friends, and I had some other things on the Q to go as well.

We ate it the next day, with some home made bread (DO style 😉 ) and a glass of good red wine.
Fantastic!

One thought on “Boeuf bourguignon from the Dutch Oven”