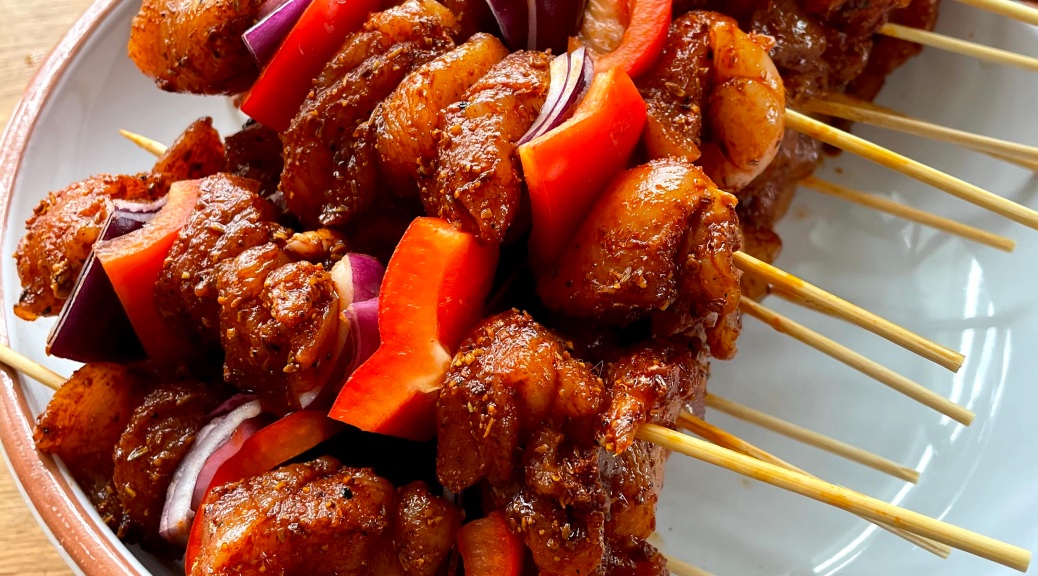 With some naan bread and some nice vegetables this is a great meal and everyone would / could enjoy it. I have some improvements here (since someone told me for Tandoori chicken it needs to be marinated in yoghurt as well, which I obviously didn’t), so I’ll keep at it, and keep improving, but these were already pretty good.

I used regular chicken breasts for the slices of chicken and I used my previously posted tandoori rub to season them.

First, chop up the breasts in nice chunks and put them in a large bowl.
Then I cut up the peppers and onions in pretty decent pieces (avg 2x2cm)

Now, add the oil to the chicken bowl and mix up well.
After that, start adding the rub and mix well with your bare hands until you see a nice consistent layer of rub on all pieces of chicken. Cover and put in the fridge to marinate for about 1-2 hours.

Grill them over direct heat and lay indirect for a total of about 10 minutes. Enjoy!!

I had never done a tandoori chicken on the grill, but if the lady asks, the lady gets (a first try). For the rub, I did the following to make it, and that was good!

Put these dry herbs in a pan (no oil or butter, ofcourse) and heat it up to release all the flavors.

Once nicely warm and smelling A.W.E.S.O.M.E.! (If I may say so myself), I’ve grounded them up to a fine well mixed seasoning.

ready to use. This amount is more than enough for multiple times, but please use at your own discretion. I’m not the boss of your kitchen 😉 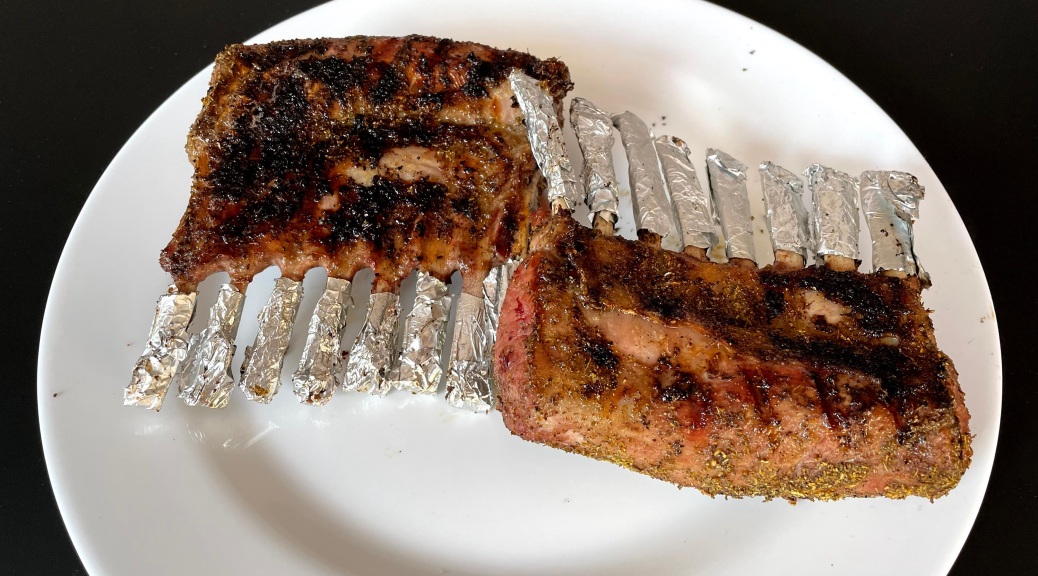 Today, since it’s officially spring (although the weather is not really working with us here….), I’ve done a nice rack of lamb.

To make the spices to rub it with I’ve used my homemade rub for lamb. I’ve oiled up the racks and sprayed a nice layer of rub on it, and after that I covered the remaining bone parts with aluminum foil to make sure it wouldn’t burn.

I’ve prepared my OTP for indirect grilling and grilled it first until there was a nice crusty part, all around. I started with the meat side, as this is the most fatty part.

After the nice crusty part, just move it to indirect, and insert your core temperature sensor (or thermometer), and let it go with the lid closed until you’ve reached a nice core temp of about 68 degrees (for medium, I guess). Some like it a little rarer, and to be honest, everything above 55 degrees (Again, Celcius, my readers, not Fahrenheit), is nice! Just grill it to your own perfection. Don’t blame me, please.

Once done, I’ve only had to remove the foil and cut it up and we had a great meal. I also did some grilled red and yellow bell peppers to accompany it. It was really good!

I’ve grounded it up really fine, and oiled up the rack of lamb and dusted it all over. Was spicy, but really good. 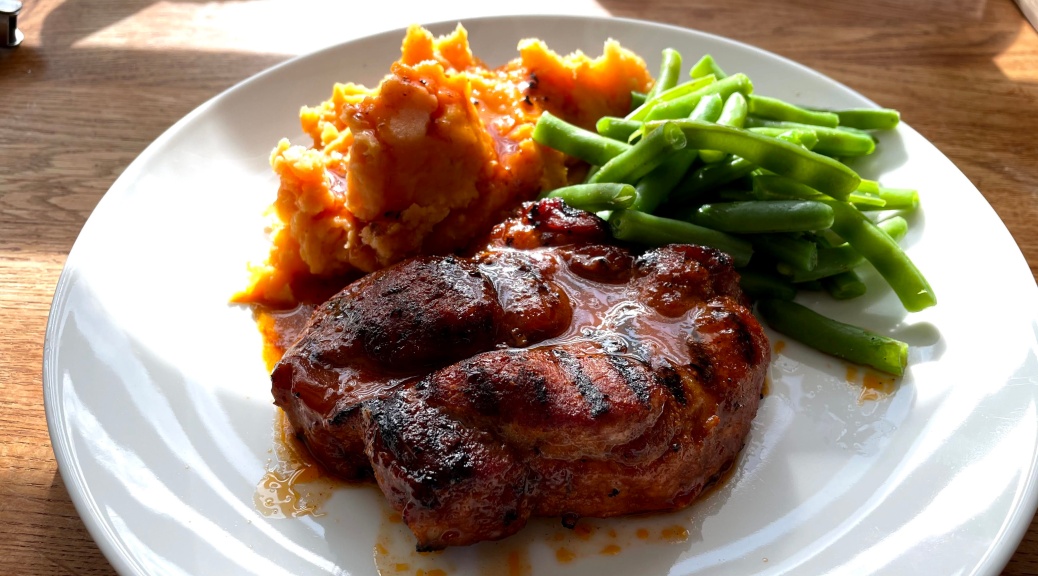 Well, it was about that time to do some bucketlist things. The weather was nice, it was about 17 degrees (Celcius, my friends, not Fahrenheit…) outside, and I had a nice pork neck, comparable to the US pork butt, laying around. St. Louis style would say; Cover everything in BBQ sauce and grill it, but I decided to give it a little twist from my dutch BBQ inspiration Noskos.

First of all, I’ve cutted up the meat in slices of about 1 inch (2 cm) thick. Not really important, the size, but I wouldn’t want them to be too thin.

After that, I’ve applied a bit of oil, to make the rub stick, and applied my home-made basic bbq rub to it. Just apply a nice thick layer of it.

After this seasoning, I’ve set it aside for a few hours in a ziplock bag, just to get some flavors in it.

Time to grill. First of all, the OTP was setup for 2 zones. (direct, indirect) and I grilled the pieces of pork for a few minutes over direct heat to get them seared up and to give a nice grill-flavor at the end.

Once that’s done, I’ve set an oven-dish up in the indirect part and added a bottle of alcoholfree beer with Citrus taste (but any beer would do, of course, play around yourself) and my home made BBQ sauce, and added the pieces of meat until they were almost all covered. If the sauce is not enough, just add a little more beer and sauce to it.

Now I’ve covered it up wit aluminum foil and let it go on 150-160 degrees Celcius for a nice hour of simmering.

After this hour of steaming in it’s bath of sauce and beer, I’ve removed the foil and turned the pieces so all parts of it can get the great flavours in it.

Now let it go for another 30 minutes of open-air grilling at 160-180 degrees to reduce the moist a little and finish the pork chops.

Once done, you have the best pork and a very tasty gravy to go along.

I’ve served it with some mashed potatoes made of sweet potatoes and some beans, but that’s up to you. The gravy and sweet potatoes we’re a killer combi and the meat was succulent and awesomly tasty!