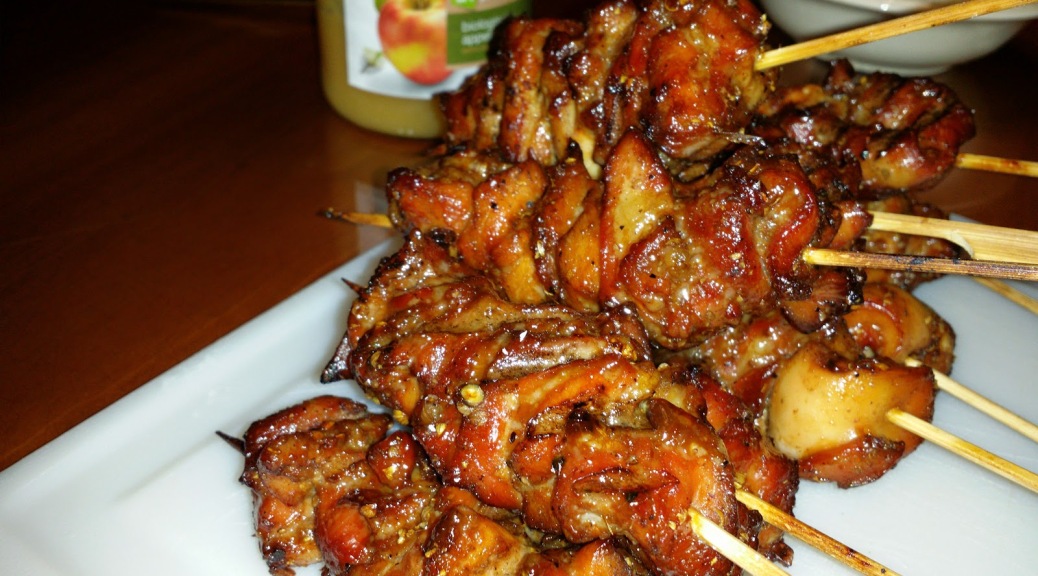 Again, a good weekend, but no large pieces of cow or pork this Sunday. I wanted to make something more simple. Also a good way of letting my son do most of the work, as he really likes doing something with the grill himself. Must be the age and the gene pool he’s made of.

He wanted to make Sateh, and I must admit that it’s been a long time since we did that. Took a bit of digging, but I finally managed to find the recipe I liked and wanted to do.

We started out with a nice bowl and a few big scoops of minced garlic. You can never have too much garlic in sateh! Also a main ingredient is Soy sauce…. 10 spoons of soy sauce would do the trick nicely. 4 teaspoons of Coriander and 2 teaspoons of Cumin powder. 3 big spoons of brown sugar, although palm sugar was preferred. I just didn’t have it and brown sugar is a good alternative. A big spoon of black pepper, although that could have been a little less, for the kids. It was pretty spicy and sharp, but the sugar made good for a lot of taste! Now just a nice spoon of oil and a squeeze of lemon juice.

Stir this all well and cut up the meat in small pieces / cubes. The one thing my son didn’t want to do is stir the meat through the sateh mixture with his bare hands, so I did that for him.

We put it all in a zip-lock back and let it rest in the fridge for 6 hours. (24 hours would be better, but then we should have planned better….).

I lit up the grill (actually it was burning already since we did some ‘new Orleans’ style street BBQ with chicken and sausages for the kids and the neighbors, but OK. I’ve put some extra coals on it and heated it back up.

I’ve indirectly grilled the sticks for about 15 minutes before I’ve put them on direct heat to grill them off. Nice and tender meat with some little grilling on the outside. It created the best sateh I’ve ever done and we ate some rice with it. Loved it, and in terms of grilling this was a very good weekend!

Looking forward to next week!