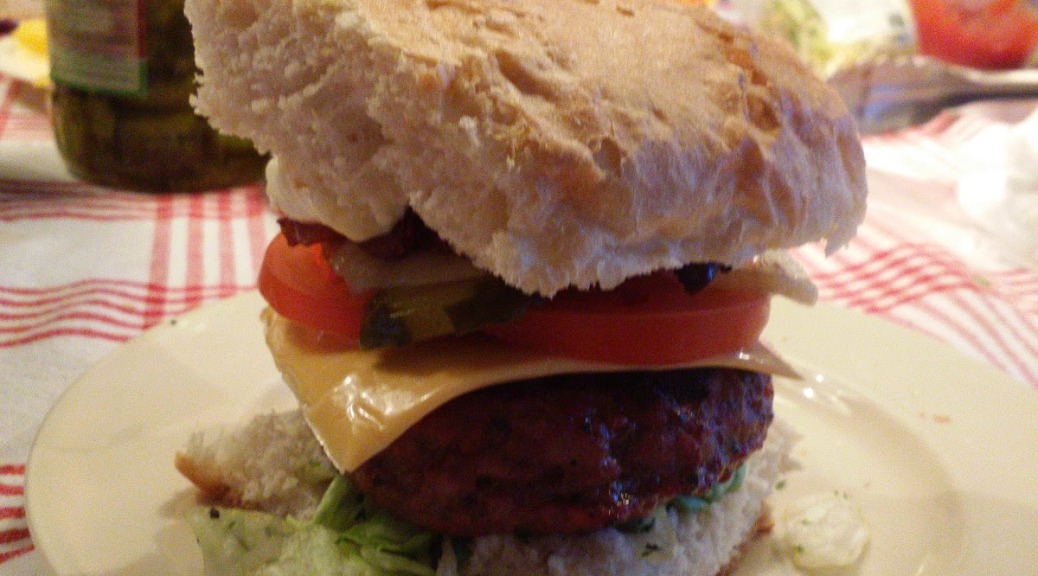 Since I just like to grill and I also like meat, I decided to put some meat on the Q again.

Oh, yes, the weather was also very cooperative, of course, so it was not really a fair choice.

What to eat, on the other hand, is something that is decided in a true dictatorial way by me, and then communicated to the rest of the family to see if I can recognize their vibe. This vibe was fine!

So shall it be done!

To make the burgers, I needed the following.

BBQ sauce (mine was chili)

I mixed this all up to a nice soft substance that I could form quite nicely in my Weber burger press. Love that thing!

First I mixed it up and divided it into roughly equal balls of beef.

For the rest, I cut up some onion into rings and sliced up some tomatoes.

I also had some melt cheese ready for the burgers and ….. sliced pickles!

But the best thing was that I still had some home made bacon in the freezer, which I defrosted and cut up on nice little slices. I grilled them and placed them on the burgers as well. Lovely touch!

But first of all, fire up as much Q’s as possible without making it look overdone ….

Instead of the dry burger buns they sell at the grocery market, I chose to use a turkish bread, which was heated up just a little before cutting it up in pieces for the burgers.

Once done, It’s just a matter of building it up to your liking!

Get some inspiration here, and try and reproduce, I dare you!